Mr. Wilson taught himself to paint with oil on canvas. Over the next 50 years he recorded the History of America and the Biblical record of the life of Jesus with incredible attention to detail, accuracy and realism.  Many of Robert’s works are monumental in size and adorn the walls of government buildings, military parks, state parks, colleges, churches, and historical museums in the United States.  He continues to paint at age 96 in Woodruff, South Carolina.

Robert’s first series of art “Jesus Journey on Earth”, propelled his art career with over 20 paintings (each 7 feet by 5 feet). The Jesus Journey series was first unveiled by President Jimmy Carter at the Washington Hilton for the National Prayer Breakfast in 1978. The twenty paintings in this book were donated to Liberty University in 2016, providing a great home for these incredible original works of art.

Robert’s second series (the Revolutionary War) included over 40 paintings, including the famous Battle of Cowpens and the Battle of Kings Mountain.  The South Carolina State House is the permanent home for those two famous battle scenes.  The SC State Museum is home for a large painting of Nathanael Greene’s Army.  The Revolutionary War series of paintings earned Mr. Wilson the first “Daniel Morgan Award” on January 17, 1981 for his contributions to South Carolina’s History.

In 2007 Jim DeMint, SC Senator, presented Mr. Wilson with the distinguished “Silver Star” for his efforts as a pilot in WWII dropping troops into Normandy (he retired a Major in the Army after the Korean War).  Then on January 19, 2017  Nikki Haley, Governor of SC, awarded Mr. Wilson with the highest civilian honor in the State of SC the “Order of the Palmetto”, a first for an artist. 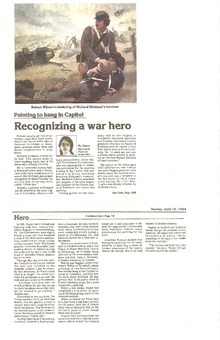 An article written by Diane Sechrest
in April 1984 highlighting Robert Wilson's art "Angel of Marye's Heights" scheduled to hang in the State House in South Carolina.
Click the link below to view article. 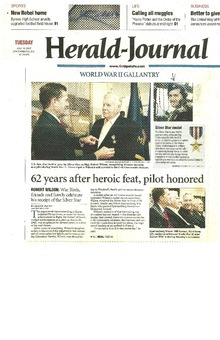 On July 9, 2007 Major Robert Wilson received a Silver Star after 62 years for his heroism as a pilot during WWII. Silver Star presented by Sentor Jim DeMint.
Click the link below to view article.

The Order of the Palmetto

As time goes by it is more and more important to remember the history of America. If we do not remember our history we are sure to repeat it. We are so blessed that Robert Wilson Sr. used his talents to help us remember. His work depicts major events like The Revolutionary War & The Civil War as well as the history of Aviation and Nascar. We owe him much gratitude for his vision to preserve the history of the great country in the world.